I’ve been using this feature mirror Hexojs repository to my GitLab account as a backup. It works well so far, especially when the repository has multiple branches. However, what if you has a simpler repository setup, like my blog which only has two branches and you want to get your hands dirty. Let’s find out.

The easiest to sync origin location (GitLab repo in this case) to another location (GitHub repo) is to add another remote,

after you push commits to origin, push to mirror as well.

Generate and add a new SSH key to GitLab and GitHub §

For this guide, I’ll be using ED25519 keypair, instead of the default RSA. This SSH keypair will be your account SSH key and has the same privilege as a personal access token; it covers all the repo that your account has access to, which is different from deploy key also known as per-repository key.

Add the public key to your GitLab account in the “SSH Keys” setting. Repeat this step to generate another keypair for your GitHub account, name the file accordingly. The private key is the credential that you will use to authenticate your account.

Create a new file in “~/.ssh/config” with the following content,

The config and private keys must have chmod 600 permission, adjust accordingly.

When connecting to the SSH server for the first time, you will encounter the following message, The authenticity of host 'gitlab.com (35.231.145.151)' can't be established.. This is because SSH also verifies the authenticity of the server. To avoid that message, you can import the respective key fingerprints into “~/.ssh/known_hosts”.

The final step is to update the origin and mirror remote repository locations.

It’s a good practice to verify the values,

Next time you push or pull from the repository, you will be prompted with a password that you previously set during ssh-keygen, to decrypt your private key and authenticate your account.

Alternatively, a neat trick I found is that you could also add multiple locations to the origin, so that whenever you push the commits, git will automatically push to all locations. This shortcut also applies to SSH authentication.

The first command will replace the default push location of origin and only the second command onward will add a new location, so make sure you add both GitLab and GitHub.

As always, verify it.

Part of this guide is also found in my previous post, Using Git and Git+SSH in GitLab CI, this time I add more explanation for clarity.

The first thing is to set up a deploy key, a public key set in the targeted GitHub repository, in which its private key counterpart will be used by GitLab to authenticate to the GitHub. Deploy key is a per-repository key, thus applies only to a repository; this effectively isolate the privilege of the key, compromise of a deploy key would not affect other repositories, unlike account key or personal access token which affects all of your repo. Nothing stops you from using the same deploy key on multiple repos, but that practice is highly discouraged.

In this use case, since deploy key will only be used in a CI environment, it is not necessary to save it “/Desktop” folder here as it would be easier to locate the keypair when configuring the CI. As always, backup your SSH key.

Two files id_github_repo.pub and id_github_repo will be generated in “~/Desktop” folder; they are public and private key respectively, remember to back them up.

On your GitHub repository (that will mirror your GitLab repository), go to Settings → Deploy keys → Add deploy key, paste the content of id_github_repo.pub and tick Allow write access. 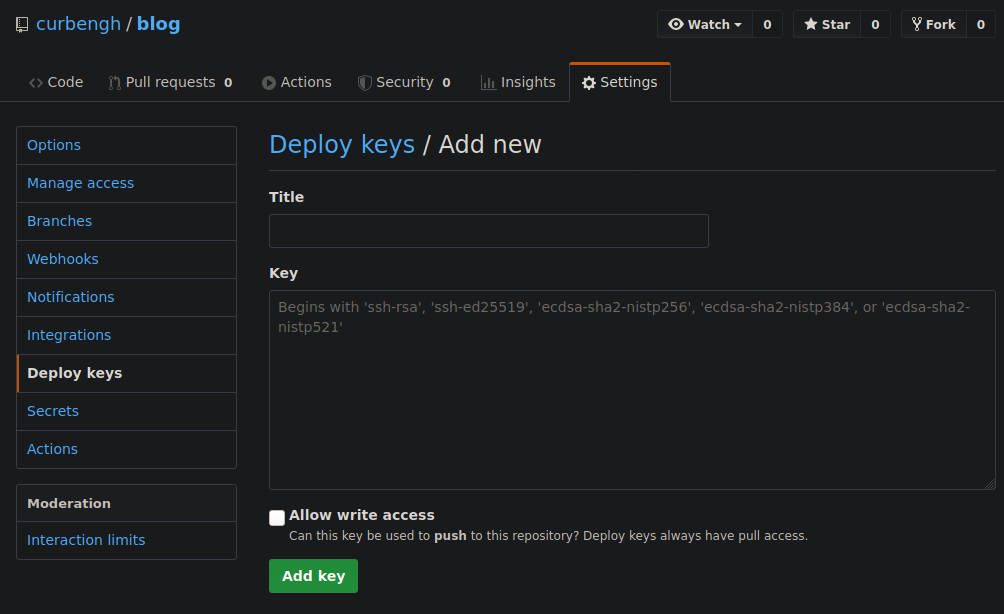 On your GitLab repository, navigate to Settings → CI / CD → Variables, add a new Var variable named GH_PRIVATE_KEY and add the content of id_github_repo, make sure Protect variable is ticked so that the key is only imported to the “master” branch (which is a protected branch by default).

Add another Var variable named SSH_KNOWN_HOSTS and the output of ssh-keyscan github.com 2>&1 | grep -vE '^#'. I explained the necessity of this step in previous section.

Add a new job named mirror in your repository’s .gitlab-ci.yml. Optionally, you could move Import SSH key step to before_script if preferred, it does not make any practical difference. However, if you want to use Update GitHub mirror step in after_script, Import SSH key has to be moved there as well–before_script and script are executed in the same shell, while after_script is executed in a different shell.